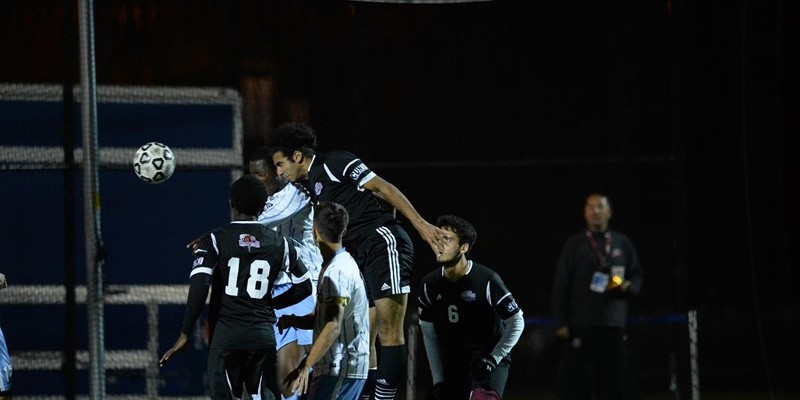 There’s a saying in life that in order to succeed at great things, you’ve got to fall in love with the process. The same theory goes behind the 2015 CUNYAC title run for the CCNY Men’s Soccer team.

The Beavers fifth CUNYAC title in program history took a decade longer than they would’ve liked and not a memory short.

Mostafa Haridi’s header on a corner from Aaron Schoenfelder in the 103rd minute gave City their first title in 10 years, but it was the process of getting to that point which stands tall, even higher than the new trophy in the athletic department itself.

“It was all coaches plan,” Haridi said of the title-winning header. “Coach always told me to go to the back post, but they had a couple of people marking me. To avoid that, I had to hide behind the post and once they crossed the ball, I went for the ball and I guess they couldn’t jump high enough and I’m thankful I got the header on.”

City’s first goal of the match came in the seventh minute on a diving header by Syed Haider, off of a long throw-in by Anthony Scarallo, who’s long-throws into the opposing-18 proved to be a threat to CSI.

“It was good because this was what we were working on in practice – getting up at six in the morning, doing corner kicks, we knew that if we got the chance, we were going to put one in,” Haider explained.

“We got the throw early, coach says to put it by the front post and somebody just flick it in” Scarallo explained of the opening goal. “Syed got his head on it and he did more than I did on that play. I just put it there and he put it in the corner. Great job.”

Haridi took home CUNYAC tournament MVP honors, scoring a pair of match-clinching goals throughout the tournament. Before his header against the College of Staten Island Saturday night, he sealed City’s win against host Brooklyn College in the semifinal, scoring on a near-perfect counter attack in the second half to put CCNY up 2-0 late.

Their improved offensive output on set-pieces throughout the season is one of the sparks of the Beavers’ current six-match winning streak. They’ve outscored teams 14-3 during the current streak and have been dominant offensively thanks to the solid play of their backline. The lone goal that CCNY allowed in the 60th minute was the first goal conceded by City in two matches – the first allowed in 240 minutes since Zeakial Daley scored in the 90th minute in City’s 5-1 win over Medgar Evars in the regular season finale.

In ways, the way City won was fitting. For a team that hustled since sunrise to perfect one of the toughest parts of any offensive attack to win a championship with it has the makings of a better story ahead – hopefully.